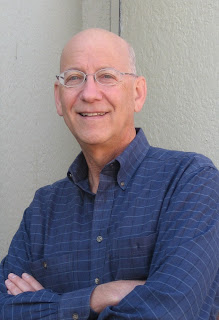 Sensing Light is the debut novel by Dr. Mark Jacobson who worked on the front lines of the HIV/AIDS epidemic as in intern in 1981 at San Francisco General Hospital. His novel effectively mixes medical history with the personal and professional stories of the people working through the confusing early days of a new era.

Mark recently answered questions for Rose City Reader. His interview is one of the stops on a blog tour for Sensing Light sponsored by Poetic Book Tours.

How did you come to write Sensing Light?

I’ve always loved reading fiction and, as a young man, dreamed of writing a novel that could move people in the way my favorite authors moved me. However, I never put in the time and effort necessary for such an undertaking until 2008 after a bicycling accident left me unconscious for several hours. That experience caused a tectonic shift in my attitude toward my own mortality. Instead of simply comprehending the abstract fact that I wasn’t going to live forever, I began to fully believe that fact and accordingly reconsidered my life goals. I certainly didn’t want to stop seeing patients or teaching medical students and residents in our HIV clinic (and I still don’t!), but I also realized that writing any more grants or papers wasn’t going to add substantively to the modest impact I’ve been fortunate to have on the practice of medicine. Suddenly, that youthful dream of writing a novel didn’t seem so impossible. I could imagine a story that I was actually well-equipped to tell. I began gradually winding down my research studies and commitments and started to develop that story.

You have such a personal connection to the story, having started your medical practice at San Francisco General Hospital in the early days of the HIV/AIDS epidemic. Did you think of writing the story as a memoir instead of fiction?

The thought of writing a memoir or a history of the early days of the epidemic has never appealed to me. While I very much enjoy reading good non-fiction, I can’t arouse any passion for writing it. Creating a story, on the other hand, easily captures and holds my imagination.

Sensing Light is completely based on historical events but is populated by totally imaginary characters. For example, cases of AIDS (like the first case in Sensing Light) were seen in San Francisco, New York, and Los Angeles before 1981, but not recognized as a new disease entity linked to certain behaviors until the CDC reported a cluster of such cases in gay men residing in Los Angeles in 1981. Likewise, the timeline of the development and availability of new antiretroviral drugs to treat HIV, which underlies the structure of the last third of the novel, is historically accurate.

Since I was a medical student in 1979 when the novel opens, was an intern in 1981 and took care of the first patient diagnosed with AIDS in my hospital soon after the disease was described by the CDC, did an infectious diseases fellowship at UCLA from 1984 to 1986, and have been an HIV specialist at San Francisco General Hospital since then, most of the historical detail found in Sensing Light has been indelibly seared into my memory. However, I did fact check from a number of newspaper and medical journal articles published between 1981 and 1991.

I learned a lot about creative writing from this experience. Before attempting Sensing Light, my last effort at fiction had been a short story I submitted to high school literary contest, so I truly had to start at ground zero. There were two things I learned that really surprised me. The first was how clueless I was at plotting and creating narrative momentum. Early on, I worked briefly with an excellent editor, Tom Jenks, who patiently showed me everything I did that was wrong, which was essentially everything, and then gave me a reading list of novels to deconstruct the plot elements. That was a very steep learning curve.

The second surprise was discovering how writing, for me, involved developing two polar opposite skills. One is a non-rational, receptive capacity to listen in my mind to characters speak and to an omniscient narrator describe people, places, and events. I simply transcribe what they say. The other skill is a hypercritical form of self-editing that demands justification for every phrase and word in that transcription. I’m not sure this will make sense to others, but it’s the best I can do at this stage of my development as a writer in articulating my process.

What do you think today’s medical profession could learn from the doctors like you who faced HIV/AIDS before the disease was understood or even named?

I think Sensing Light can provide some worthwhile historical perspective for today’s physicians. By the end of the 1960s, there was a wide-spread belief among physician-scientists in the US that we were nearing the end of the era in which infectious diseases were a major cause of morbidity and mortality. A decade later, the AIDS epidemic began; and to date, HIV has directly caused more deaths globally than all military deaths in World Wars I and II combined! If there hadn’t been a handful of scientists in the 1970s already developing knowledge about an obscure class of viruses associated with a rare form of cancer, we would have felt like we were back in the Middle Ages facing the Black Death with no idea what was causing this plague. The AIDS epidemic was a lesson in humility for those of us who were on the front lines in the 1980s. Today’s young physicians should continue to be prepared for the unexpected.

I’ve been a voracious reader of fiction since childhood and have so many favorites it’s hard to know where to begin. As a teenager, I read every work published by John Steinbeck, Ray Bradbury, and James Baldwin. In college, all of Dostoevsky, Flaubert, Mann, Hesse, Hemingway, Kerouac, and Sinclair Lewis. I’ve recently been re-reading Sinclair Lewis and Dostoevsky and still love them. One of my favorite living American authors is T.C. Boyle. There are also several genre fiction writers I really enjoy. I’ve read pretty much everything published by John le Carré, Tony Hillerman, Scott Turow, and Patrick O’Brian.

I just finished The Sympathizer by Viet Thanh Nguyen—the 2016 Pulitzer Prize winner for fiction. The novel is set in the 1970s in Vietnam and Los Angeles, and the protagonist is a half-Vietnamese, half-French, South Vietnam army officer and mole for the North Vietnam government. An epic masterpiece and profound meditation on identity!

A friend who published a successful memoir told me I would have to re-write my novel 100 times before I would be satisfied with it. I didn’t keep count but am sure she had the order of magnitude right.

I have been very fortunate to have the help of an outstanding publicist, Mary Bisbee-Beek, who has been able to arrange bookstore readings and radio, television, and blog interviews such as this one. I also have an author website and post all published book reviews and readings and links to interviews on Facebook. Despite all this, it’s still very difficult for an author like me, published by a small press and lacking connections to major newspaper book reviewers or NPR personalities, to get mass market attention in the book world. So publicity has to be primarily by word of mouth.

Do you have any events coming up to promote Sensing Light?

The San Francisco Public Library’s James C. Hormel LGBTQIA Center is hosting me for a reading at the Main Library building (100 Larkin St, San Francisco, CA) on Tuesday, October 4th, at 6 PM. We are planning other events for the fall and winter.

I am. It’s a more ambitious effort from a literary perspective than Sensing Light was in that I’m aiming for more narrative suspense over a longer time period and more complex character development than in Sensing Light, as well as attempting to create empathy for a protagonist who wants to be altruistic but is morally compromised.

SENSING LIGHT IS AVAILABLE ON-LINE OR ASK YOUR LOCAL BOOKSELLER TO ORDER IT!


Posted by Gilion at Rose City Reader at 8:00 AM 2 comments