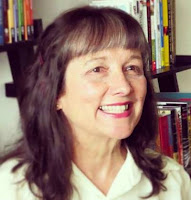 Mandy Smith blogs at Healing Beyond Survival. Her stepfather sexually molested her from the time she was three until she finally spoke out at age 14, only to be shunned by her family. Her courageous new memoir, Secrets in Big Sky Country exposes the prevalence of childhood sexual abuse and gives hope to survivors through her example of endurance and resilience.

How did you come to write Secrets in Big Sky Country?

I like to say that my book was birthed in a Write Around Portland Sunday Morning "Prompts" workshop held at Powell’s Books store in Portland, OR. However, when attended that workshop back in the summer of 2011, I had no idea that those two-to-five minute prompts would lead to a book. The only thing I knew at the time, I was trying to save my life.

After the workshop was over, I decided to finish writing out the stories the prompts had triggered. I took a personal essay writing class, Writing it Real, for about a year. Sheila Bender ran the class and one day she said, “If you’re thinking about turning these stories into a book, maybe you should start writing them in chronological order.” I couldn’t breathe for a few days. I’d never even thought of such an idea. But, I never looked back. At the end of one year, I had finished my first draft. It took many revisions and three more years of fighting with my inner critic over my fear of putting it out there. Once I began advocating for abuse survivors, my fear became a (mostly) moot point. The book is so much more than my story; it’s a tool I hope will help others.

Your memoir is an intensely personal account of being abused by your stepfather for many years. Was it difficult to tell such an intimate story?

Writing it was probably more painful that the abuse itself. I loved my stepfather—the only dad I ever really knew. And I believed he loved me. Even as an adult, as sick as I became over the abuse, I tried to convince myself that everything he did to me was out of love. (After all, that’s what he told me.) When I would read back chapters after I’d written them, and it started to sink in that it had been for his gratification, I cried and cried, as though feeling betrayed for the first time. I had never recognized that I’d been groomed—or just how long-lasting brainwashing can last.

Because there is a large scope of experiences in my book, from familial sexual abuse, rape, teen pregnancy, etc., I think the book will appeal to many audiences:


Can you recommend any other books about healing after child sexual abuse? Are any of them personal account like yours?

The first, and best, book I ever got, and was all I really needed was: The Courage to Heal by Ellen Bass and Laura Davis, along with the workbook.

I really related personally to the following memoirs. I think for me, more than “healing” as the takeaway, it was the miracle of surviving adversity:

In the publishing industry, Secrets in Big Sky Country is considered a confessional book; some call it a “misery memoir.” I feared that people would think it was a woe-is-me tale, and that was the last thing I wanted—to portray myself as a victim. Dwelling on what readers might think about me or my story started getting in the way of my writing; I even questioned whether I should publish it. But as I began sharing with the outside world what I was doing, I came into contact with incredibly strong women and men who had gone before me, sharing their own stories of childhood abuse, who had stayed strong despite their doubt. They reminded me: “You know your story better than anyone else. You have nothing to prove, only to share. As survivors, it’s what we can do to turn our trauma into triumph.” Once I allowed that to sink in, I became incredibly strong in writing my truth. That’s a good place to be.

What resources would you recommend for survivors of child sexual abuse? How about for their loved ones and supporters?

The books I would recommend for survivors: The Courage to Heal by Ellen Bass and Laura Davis, and for their loved ones, Allies in Healing: When the Person You Love Was Sexually Abused as a Child by Laura Davis.

There are wonderful resources on line:


What can friends and family of abuse victims do to support them?

The very best thing friends and family can do is to let them know they believe them. Don’t tell them, or even suggest, that they put the abuse behind them and “move on.” Nothing is more invalidating to the victim. Family/friends should learn all they can about the long-term repercussions of childhood sexual abuse so they’ll better understand if their loved one has depression, or is triggered by things that seem quite innocent to a “regular” person, or if they isolate. Patience, understanding, and support will do more for the survivor than anything else.

You have an excellent blog called Healing Beyond Survival. Please tell us about your blog and the other work you do with abuse survivors and advocates.

I credit my blog for being instrumental in saving my life; it actually pushed my recovery into the healing phase. I thought I had finished writing my book, but I still felt broken. I’d always thought blogging was silly (even though I had never read one). As the anniversary of my brother’s suicide approached, and the hurt from it made me wonder if I should finally give up, as he had, I was compelled to write those feelings down—and that became my first blog post. I hit Publish and thought that would be the end of it; however, the next morning, I woke to an overwhelming response. People told me they had cried after reading my post, they understood because they, too, had been sexually abused as a child and were trying to manage the repercussions—depression, eating disorders, PTSD… They thanked me for my courage in writing and told me to keep writing and talking about it, they needed it. So, I kept writing. My reaching out opened a whole new world for me, and I began healing.

I have become passionate about helping others. I will be a voice for others—even if my voice shakes—until they can find their own. I support many advocacy groups, and I will be a trained Darkness to Light facilitator in September; I will begin doing Stewards of Children workshops after that. My mission is to raise awareness about childhood sexual abuse.

What is the most valuable advice you’ve been given as someone working to help abuse survivors?

“Ignore that inner critic! Telling your story will inspire others to do the same.” As a survivor, it’s easy to trigger that inner critic. If someone rolls their eyes in doubt when a news story comes on about a rape accusation, or negative responses are made when you tell people that adults who were molested as children can have PTSD, it’s really easy to trigger that old shame and self-blame. When someone says they doubt that it’s possible to have an almost photographic memory about events that happened decades earlier—the disabling shame can be instant, and the instinct is to crawl back into that secret-keeping closet. Learning to recognize triggers is critical for a sex abuse victim. Shutting that inner critic down as swiftly as possible means we don’t let it take control, and we move into survivor role instead of victim.


What’s next? Are you working on new projects?

Yes, I’ve been working on another memoir, a sequel of sorts, but this one will be a collection of essays. Some are chapters from Secrets in Big Sky Country that I removed for the sake of keeping the book to a reasonable page count. Other essays are stories that happened after the book ended—there was more abuse, yes, but I also had crazy neighbors, I escaped from rehab, drove a car 10 mph down the freeway after smoking pot, cussing out the other drivers for speeding. This book gives me a chance to use humor, which has been my underlying survival mechanism.

I’m working on a children’s book that demonstrates animals as a healing agent in a child’s life. The chapter in Secrets about my beloved pet rabbit that I walked on a leash, told my secrets to, and that was killed in front of me by my stepfather, remains a traumatic memory for me. So many people have let me know they were really moved by that story, and they have shared their own stories about depending on a pet to get them through their abusive childhoods. I’m hoping the message about respecting a child’s need for their pet will be received well by parents when they read it.

I also plan to start a writing group for survivors who would like to write their childhood abuse story; it doesn’t have to be for publication. It will be a safe place, no judgment; a place where everyone hears, “I Believe You.”

SECRETS IN BIG SKY COUNTRY IS AVAILABLE ON AMAZON OR ASK YOUR LOCAL BOOKSTORE TO ORDER IT!