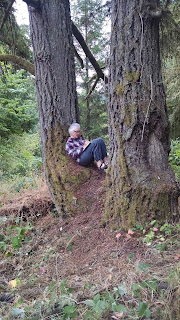 After living for 15 years in a tent and trailer in the foothills of southern Oregon's Coast Range, Evelyn Searle Hess and her husband built a real house on their 20 acres. But they wanted their "better nest" to be off-grid, sustainable, and reflect the personal and community values they had developed during their years of camping life.

Her new book, Building a Better Nest: Living Lightly at Home and in the World, is the story of how they built their house and accomplished their dreams.

How did you come to write Building a Better Nest?

My earlier book, To the Woods, was the story of our lives during fifteen years of camping. Though of course not without challenges, those years were rewarding in numerous ways: in new connection to the natural world, in growing self-knowledge, in improved interpersonal relations and, perhaps most importantly, in the kindling of gratitude for gifts of nature such as clean drinking water, that I had formerly taken for granted. When readers seemed to consider simple living a deprivation, I wanted them to know that, rather than a hardship, I found it to be an awakening and a joy. A wish to convey that message was my original impetus for writing Building a Better Nest.

But as I began to tell the story, it grew and branched and meandered like a river. A river and its watershed, because we don’t nest solely between walls. The ecosystem, the community and the planet all contribute, as we and our actions and attitudes also affect them. So that became the driver for the book. What kind of world do I want to live in? How can I be a responsible and effective organism within this tortured and wondrous biosphere? What models do I have in history and in my ancestry? What societal, economic and political roadblocks stymie cooperative sustainable living in each layer of nest? And finally, as climate and other environmental and social issues become increasingly dire, how can we not only lessen the impact, but also learn to live in the most comfortable and satisfying manner in a changing world? Building a Better Nest evolved chasing those questions.

I have worked a variety of jobs, but primarily within the world of plants. For twenty years my husband and I owned a plant nursery and I designed gardens and often installed and maintained them. I managed commercial greenhouses, and for ten years ran the teaching and research greenhouses at the University of Oregon, where I also taught plant propagation. Watching plants grow, seeing their response to their environment and understanding their natural cycles and interactions with other organisms, all were important fodder for exploring wider connections in the natural world and our place in it.

Building a Better Nest is as much your memoirs as it is about building a sustainable, off-grid house in the woods – did you have any qualms about sharing so much?

I got through my qualms during the writing of To the Woods. That required a big psychological shift. Once I acknowledged that telling the story required an honest look within, the processing helped me accept my own flawed self. After making that leap, I didn’t mind sharing

Your book is beautiful, philosophical, and somewhat practical, but not technical. Who is your audience?

The audience is anyone who sees depleted resources, endangered species, economic disparities and the frightening potential effects of climate change; recognizes that society must change course, and that there’s no superhero to do it for us. Rather than being a manual (I’m no expert!) I hope Building a Better Nest will inspire discussion that may guide readers to find their own paths to building their personal and cooperative best nests.

Can you recommend any other books about personal home construction or living off the grid? Are any of them personal account like yours?

Charles Goodrich’s Practice of Home and William Sullivan’s Cabin Fever. I wouldn’t say they were either like mine or like each other’s, but both share personal stories within the framework of house-building, and both are definitely well worth reading.

There were many surprises: that borax is anathema to ants; that a gopher snake with a body diameter of more than an inch could thoroughly enmesh itself in the three-quarter-inch grid of bird netting; that people were already arguing the necessity of sacrificing the environment to benefit the economy in the nineteenth century; that the brain is elastic and can continue to form new synapses and learn new emotional responses well into old age. But most surprising to me was my personal change through the research, observation and analysis, followed by the synthesis of writing.

Can you give us an example or two of advice you wished you had before you started to build your own house?

I’m afraid that likely advice would have been along the lines of, “You’re too old.” Or “You don’t have enough money.” Or “You’re not clever, organized or hard-working enough.” And though those statements may be true, I’m grateful we didn’t hear them. Sometimes the only way forward is on unfounded hope. But I do wish that I had picked up carpentry skills at some earlier point of life.

What were you least prepared for when you moved to the Oregon Coast Range, before you built your house?

In a practical vein, the necessity of driving more than we would prefer. When we lived in town, we mostly biked and walked. In a deeper—perhaps spiritual—vein, I was completely unprepared to face my duplicitous (or at least divided) attitude. On one hand, I considered myself a self-confident person happily turning her back on convention, on the other hand, I had to acknowledge that I had confided in almost no one about my new life. Intellectually dedicated, I apparently harbored a sub-conscious germ of society’s condemnation of the appearance of poverty. I desperately feared—and rejected the idea of—pity.

I tend toward non-fiction, but my taste is eclectic. I just finished Barbara Kingsolver’s The Lacuna, preceded by two novels by local friends, Deb Mohr’s Great Day in the Morning and Chris Scofield’s The Shark Curtain. I am currently reading The Age of Empathy by Frans de Waal.

Exploring the questions constantly running in my head.

Tell the truth—the deep truth, which sometime requires some probing. Be specific, but don’t use the first description that pops into your head.

THANKS, EVELYN! GOOD LUCK WITH YOUR NEW PROJECTS!

BUILDING A BETTER NEST IS AVAILABLE FROM OSU PRESS, FROM POWELL'S, ON KINDLE FROM AMAZON (OR PAPERBACK), OR ASK YOUR LOCAL BOOKSELLER TO ORDER IT!