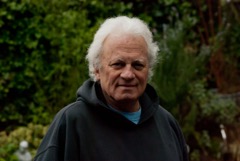 Oregon may have legalized pot, but Lindsay R. Mohlere has spun great fiction out of an illegal grow operation hidden deep in an Oregon National Forest.

His new novel, The Grow, is a fast-paced crime story about bad guys ripping off bad guys and the many ways that can go wrong. Think Elmore Leonard in the Wallowas. The Grow puts the high into heist!

How did you come to write The Grow?

I’ve been writing outdoor – hunting, fishing, and adventure – short stories for magazines for several years and felt it was time to try something longer. I wanted to write a story about thieves stealing from other thieves. You know, a crime doesn’t pay kind of thing. About the same time, I learned the DEA had busted a huge outdoor cannabis grow in the Wallowa Mountains in northeastern Oregon. The raid eradicated over 93,000 plants in a deep canyon about a mile long. It was the largest bust ever in the state and ten cartel-linked individuals were also taken into custody.

I have hunted and fished in that territory for several years, so a rip-off of a cartel grow op felt like a good backstory for my characters. Most of the big outdoor cannabis farms on public and tribal land are tied to Transnational Criminal Organizations (Cartels). Every hunter I know that goes into the woods is aware of the danger these operations present. I also wanted to shed some light on the damage large illegal outdoor pot plantations have on the environment. The pesticides, herbicides, fertilizer, human waste, and other garbage left at grow sites results in chemical contamination and alteration of our watersheds and precious natural vegetation.

In my youth, I was pretty much a loose cannon. I worked at several odd jobs, like painting houses and landscaping. I worked on a section gang for the railroad and later became a switchman/brakeman for the Burlington Northern. During the construction of the Alaska Pipeline, I went to sea working on sea-going tugboats. Had a few poems published and sold a couple stories. I even toyed with the idea of getting an MFA in Creative Writing but took another turn.

I got into the advertising business in Portland in the late 70’s, starting out in radio sales and then moved into creative services. I became a copywriter crafting radio, television, and print ads for many local, regional, and national clients. About ten years ago I began writing short fiction for outdoor magazines, and, as they say, one thing lead to another.

I no longer do commercial work, choosing to concentrate on freelance journalistic endeavors, short fiction, and another novel. My “day job” continues to be what it’s always been – writing.

Your story has realistic descriptions of how drug cartels operate marijuana grow operations in National Forests. How did you research those kind of details?

I went “Google Crazy.” I read newspapers from around the country. I spent days studying photographs from different busts. I talked with migrant workers and sheriff’s departments. I interviewed outdoor growers, both legal and illegal. I studied the cartels. I listened to “narco corrido,” drug lord ballads. I watched B grade “narco-cinima” movies.

The writing process surprised me. Getting so deeply involved with the characters really got to me. Living in someone else’s head, deciding who they are and what they are was a trip. It’s nothing like writing short stories.

About half way through the writing process, I started thinking about an ending. By the time I needed to wrap up the book, I also realized I needed to change the beginning. The result was a defined linear plot.

What kind of books do you like to read? Do you have a favorite genre? And guilty pleasures?

I enjoy crime, mystery, and adventure tales, along with some biographies. My guilty pleasure is poetry.

In this digital age of independent publishing, authors must carry the burden of promoting their own work. To that end, I jumped into the social media pond with both feet. I already had a blog, Upland Outdoors, that I began using as a promotional tool for the novel. My website features the book as well. I created a Facebook author page, which I find totally baffling.

I haven’t yet got onto Twitter, but it’s not out of the question. I also have a YouTube video I’ll introduce later this summer. In addition, I’ve reached out to several blogs like yours and some of the magazines I write for have mentioned the novel and promoted my web site. So far, Email has been the best tool.

Do you have any events coming up to promote The Grow?

I’m going to schlep some paperbacks around to the medical pot stores to see if there’s an interest. The novel isn’t against marijuana, but it’s not really for it either, so I don’t know what kind of reception I’ll get. I’m not interested in becoming a book distributor, but if I can get a couple of outlets for the paperback version of The Grow, I’ll be happy. [Editor's Note: Brilliant!]

I’m always open to do readings and such.

Hopefully a Kindle Short will lead the way to the publication of a collection of short stories.

Around August 1, a short story, "Last Cast at Indian Falls" (a fishing thriller), will be published in Sixfold, an online and paperback literary magazine.

I am also working on another novel I hope to have out after the first of the year. It will have an Oregon background and maybe a few characters from The Grow.


THANKS, LINDSAY! AND GOOD LUCK WITH THE BOOK!

The Grow is available at Amazon, Barnes & Noble, iBook, etc.