Book Review of the Day: Everything I Want To Do Is Illegal 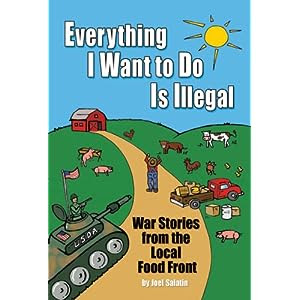 "But is it legal?" This is by far and away the most common question I am asked after doing a workshop on local food systems and profitable farming principles.

So begins Joel Salatin in Everything I Want To Do Is Illegal: War Stories From the Local Food Front . And no, he is not talking about growing pot or smuggling in truckloads of undocumented workers. He's talking about the kinds of things small farmers would like to do to build environmentally friendly, sustainable, economically viable, local enterprises – things like curing bacon, selling homemade pound cake, hiring teen-aged interns, selling a neighbor's pumpkins, milling lumber for local projects, allowing on-farm abattoirs, and building a house smaller than 900 square feet.

Salatin is the owner of Polyface Farms, "the farm of many faces," in Virginia's Shenandoah Valley. He was featured in Michael Pollan's The Omnivore's Dilemma and stole the show as the big-hatted farmer in Farmageddon.

He is quite a character. He describes himself as a "Christian libertarian environmentalist capitalist" and pulls no punches when explaining his views on how farming should be done and people fed. Chapter by chapter, he explains how one-size-fits-all government regulations designed for large-scale, industrial, monoculture agriculture unfairly limit small farmers trying to serve local communities by providing a variety of healthy food, humanely produced.

Salatin is a master of what Pollan described as the Prairie Populist stemwinder, so the book has plenty of righteous sermonizing on freedom and responsibility. For example:


Ultimately, the government's involvement in medical care creates the justification to penetrate personal liberties with regulations that codify exactly what the wards of the state may or may not eat. . . .

You can drink 20 Cokes a day, but be careful about that homemade pound cake – it will surely get you. . . .

The only safety comes in our communities, our homes, our families, from the bottom up. And these institutions must be free to experiment, to innovate. . . .

The freedom to opt out of the mainstream paradigm is the cornerstone that preserves the minority view, differentiating between top-down societies and bottom-up societies. Our opponents favor coercing consumers to buy only government-approved food, thereby denying opt out freedoms.

He doesn't care whose ox he gores when trying to make a point. He criticizes liberals for looking to the government to solve problems and conservatives for being soft on corporate fat cats manipulating the system.

He's also a good writer with a sense of humor and a big heart. The book is a pleasure to read even while it gets your blood boiling over the petty tyrannies of government agencies doing their best to thwart small farmers and other agricultural entrepreneurs.

This counts as one of my books for the Foodie's Reading Challenge, hosted by Margot at Joyfully Retired.

Posted by Gilion at Rose City Reader at 10:59 AM 8 comments