Lady Q at Let Them Read Books is the December host of Mailbox Monday. Thanks Lady Q!

I'll be hosting in January, so please stop by next Monday to leave your first list of 2011.  And come back for all five Mondays in January because I will be hosting a book giveaway each week.

Santa came through for me this Christmas in a big way.  He brought me a lovely nine-volume set of Alexander Dumas novels published in 1893.  Each book has the same cover and the set includes:

The Count of Monte Cristo;
The Three Musketeers;
Viconte De Bragelonne (in 2 Volumes);
Marguerite de Valois and Chicot, the Jester;
The Forty Five Guardsmen, The Conspirators, and The Regent's Daughter;
Memoirs of a Physician;
The Queen's Necklace and Taking the Bastille; and
The Countess de Charney and The Chevalier de Maison Rouge.

But the biggest surprise -- and the project that took Santa a lot of time on Ebay -- was an incredible collection of gorgeous Easton Press and Franklin Library editions.  Some are personal favorites, others are classics, and several are Pulitzer winners I've been looking for for a long time. 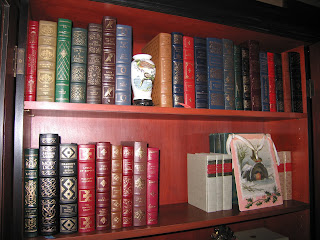 The Pultzer winners in the bunch are:

Alice Adams by Booth Tarkington;
One of Ours by Willa Cather;
Years of Grace by Margaret Ayer Barnes;
The Store by T.S. Stribling;
Honey in the Horn by H. L. Davis;
Dragon's Teeth by Upton Sinclair;
Journey in the Dark by Martin Flavin;
Guard of Honor by James Gould Cozzens;
Andersonville by Mackinlay Kantor;
Advise and Consent by Allen Drury;
The Reivers by William Faulkner;
The Keepers of the House by Shirley Ann Grau;
Angle of Repose by Wallace Stegner;
Humbolt's Gift by Saul Bellow; and
Rabbit is Rich by John Updike