Each week, in addition to hopping around and visiting some terrific book blogs, participants answer a bookish question.  This week's question comes from Debbie Nance at Readerbuzz:


What is the most difficult literary work you've ever read? What made it so difficult?
Ingrid answered the question for the Blue Bookcase crew this week. Her essay on Thomas Mann's Doctor Faustus is excellent. I read Goethe's Faust in college, but never Mann's retake. Ingrid makes a good case for doing so.

For me, that question is a lead pipe cinch to answer, because I've read Finnegans Wake. If anyone who has read it does not pick it as the most difficult book, he is lying.

Before I started FW, I knew nothing about how it was written and had no idea that it was so crazy. I knew that it is Joyce’s magnum opus, that it took him 17 years or so to write, and that he had staff helping him research.

I also knew from reading about FW that it all takes place in one night, but is a history of all time, and that the main dream character feels guilt about something he did in a park with two "temptresses" and for vaguely incestuous feelings he has towards his daughter. I "knew" these ideas only in the sense that I read about their existence. But by 100 pages or so into the book itself, I still had no actual comprehension of them. Or anything, for that matter. The closest I could get would be a vague suggestion of some of these themes from sentences like this:

Yep. That's what the entire book is like. All 620 pages. Made up words, foreign words, amalgamated words – crazy stuff. I never understood an entire paragraph; only occasionally comprehended an entire sentence, and definitely only short ones; and was delighted at every word I caught. I read it for the experience of reading it, but gave up trying to understand it after the first page. Yes, I tried reading it out loud, and that helped – but only to a point. I decided to just let it flow over me and enjoy the sounds like poetry or music.

Finnegans Wake was definitely the most difficult book I have ever read. It is not that I hated it. It was incredibly frustrating, but it has poetic beauty. I do not think anyone should read it unless they are compulsive about finishing their book lists (like me), or are really into James Joyce. But I like the idea that there is a structure to it (even if I couldn't follow the structure). For me, it was like that famous Hieronymus Bosch triptych, The Garden of Earthly Delights. I do not like it. I think it is weird. It takes too long to look at and there are so many things in it that I do not understand. But, I admire the mind and talent that created it. 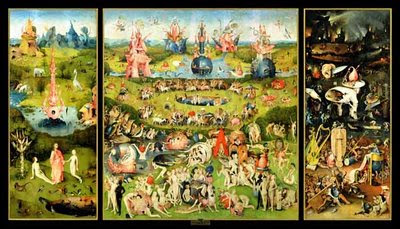 Posted by Gilion at Rose City Reader at 7:55 AM 31 comments