Opening Sentence of the Day: The Mermaid and the Messerschmitt 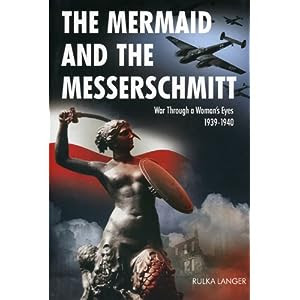 "In front of the house, under the big chestnut tree, Mother sat on a wooden bench talking to Uncle."

-- The Mermaid and the Messerschmitt: War Through a Woman's Eyes, 1939 - 1940, "Rulka Langer's extraordinary personal memoir of the opening chapter of World War II, covers the six-month period from August 1938 to February 1940 -- from the end of the last peacetime summer, through the Nazi invasion of Poland, the Siege of Warsaw and the first few months of the Nazi occupation."

This has been on my Guilt List for a long time. But it caught my attention now, because I was fascinated by the women's stories about WWII in London in Small Island by Andrea Levy, which we just read for book club.

Also, it is a good balance to Valley of the Dolls.

Posted by Gilion at Rose City Reader at 4:07 PM 2 comments