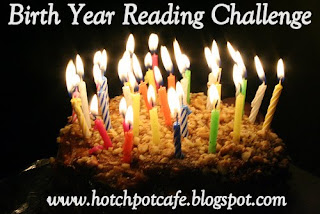 THE CHALLENGE
I am finally officially signing up for the Birth Year Reading Challenge hosted by Hotchpot Cafe. The idea is to read books published in the year of your birth. There is no set number of books to read, but you earn a "candle" for each book and the participant with the most candles by December 31, 2010 wins a pretty terrific prize.

-- The Grail: A Year Ambling & Shambling Through an Oregon Vinyard in Pursuit of the Best Pinot Noir Wine in the Whole Wild World by Brian Doyle (leading up to the point that 1966 was also the first year that pinor noir vines were planted in Oregon, giving birth to Oregon's wine industry).


THE BOOKS
It's hard to say how many books I will read this year that will earn me a candle. There are probably several books on my TBR shelf that were published in 1966, but without going through them all, it is hard to guess which ones. As I stumble across them, I will add them to the list of possibilities.

I'd like to stick with books I already own, since I have so many to get through. But there are a couple of books published in 1966 that have captured my fancy and I am keeping my eye out for.

So far, my possibilities include:


I, the King by Frances Parkinson-Keyes (I'm a big FPK fan and found this one at a library store the other day)

The Comedians by Graham Greene (on my TBR shelf)

The Anti-Death League by Kinglsey Amis (which I do not own, but would like to because Amis is one of my all-time favorites)