Review of the Day: City Limits 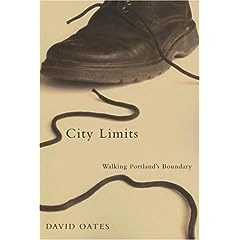 There is a line around the Portland metropolitan area called the Urban Growth Boundary – a controversial land use tool designed to control sprawl and protect Oregon’s farmland and scenic beauty. It’s one of those things that sounds like a terrific -- if somewhat utopian -- idea but that gets messy in practice.

Inner city yuppies, me included, tend to like the idea of the UGB because we can live in old, established neighborhoods with tree-lines sidewalks, but drive to a vineyard tasting room in 30 minutes. For families looking for an affordable house in the exurbs, or the grandchildren of farmers unable to subdivide just because they are on the other side of the line from a new strip mall, the UGB can seem like an arbitrary, unfettered exercise of government interference.

In City Limits: Walking Portland's Boundary, David Oates explores the UGB line – physically and metaphorically. He spent two years walking and kayaking around the entire boundary and writing essays inspired by his explorations. He also includes essays by some of the people he invited on his journeys, and dialogs with a few of his favorite dead environmentalists, such as John Muir.

Oates is definitely in the pro-UGB camp, sometimes waxing rhapsodic about the glories of centralized urban planning. But he shows a libertarian streak that chaffs at capricious and heavy-handed government action. While he bemoans -- with the drama of Chicken Little -- voters’ attempts to dismantle the current land use system, he acknowledges that a “system which seems immune to logic, above explanation, and insulated from individual citizens’ rights, complaints, and questions” will inspire revolt. If not evenly balanced, City Limits at least recognizes that there are two sides to the debate.

The book is best when Oates writes about what he sees and the people he meets while walking the boundary. He has a lyrical style that brings life to his subject, especially his musings on how people chose to live together. His poetic imagery occasionally overwhelms his ideas, and his imagined dialog with Italo Calvino is downright mystifying, but overall, reading his essays is like walking and talking with a thoughtful friend.