Review: Au Revoir to All That 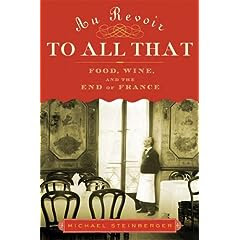 For years, wine writer and ardent Francophile Michael Steinberger ignored the doomsayers trying to hang crepe on France’s gastronomic culture. He dismissed out of hand a 1997 New Yorker article with the interrogatory headline, “Is There a Crisis in French Cooking?” He refused to consider the emergence of super star Spanish chefs and their la Nueva Cucina as a real threat to France’s dominance in the kitchen. And he discounted his own sub-par dining experiences as well as the accelerating death rate of France’s restaurants, closing by the hundreds each year.

But, eventually, the totality of the evidence overwhelmed his denial. The “snails fell from [his] eyes,” he explains, after a particularly bad lunch at his favorite Parisian restaurant. His “adored institution” had changed, replacing its classic dishes with a dumbed-down menu and the equally classic waitresses with “bumbling androids.” The experience forced him to consider the unthinkable idea that French cuisine might really be in trouble. He decided to find out for himself.

In Au Revoir to All That: Food, Wine, and the End of France, Steinberger opens the cupboards of France’s culinary heritage and makes a compelling case for how and why the situation looks so bleak. Topics he examines include chefs who leave the kitchen and toque behind for the boardroom and business suit; the economic and bureaucratic quagmire sucking down French restaurants and associated businesses; competition from innovative Spanish, British, and American chefs; France’s wholehearted embrace of fast food and willing abandonment of culinary tradition; the mess of the Michelin star system; the mess of the wine appellation system; the demise of handcrafted cheese and lack of support for other artisan producers; and the general malaise of the French public who seem not to notice or care that their fabled cuisine may soon be a thing of the past.

Steinberger did his research. He interviewed star chefs, rising stars, falling stars, restaurateurs, wine makers, wine merchants, cheese makers, and PR flaks. He visited restaurants, wineries, and farms; eating, drinking, and listening his way through the French culinary scene. He amassed a staggering mountain of statistics. And then he turned these raw ingredients into captivating vignettes that tell a story so much bigger than the sum of all these parts.

For instance, it is interesting to learn that 90 percent of the Camembert cheese made in France is made from pasteurized milk by industrialized producers. But it is absolutely fascinating to read Steinberger’s story about visiting François Durand at his dairy farm outside the virtually extinct hamlet of Camembert. Here in Normandy, in the legendary birthplace of France’s most famous cheese, there are only seven producers left who make raw-milk Camembert. Of these, Durand is the last one who makes cheese by hand, using only milk produced from his own cows. The only one? How can that be? Stories like this one of a lonely cheese maker ladling milk in his barn put a face on the problems Steinberger seeks to explain.

But Steinberger does more than string together individual snapshots. He uses stories like Durand’s to illustrate the larger problems -- including French social attitudes and politics -- threatening French cooking. For example, sticking with the cheese theme, Steinberger questions why there is not greater demand for products made by masters like Durand; why the French seem content with industrialized, bland, plastic-like cheese. He compares Durand’s constant struggle to make a living selling hand crafted cheese at the same price of supermarket, machine-made cheese with artisanal cheese makers in America. Why, he wonders, do Paris chefs not drive two hours to buy Durand’s superior product, like New York chefs are wont to do? Why do rich French yuppies not retire to the French countryside and start making their own fancy cheese, like so many urban refugees in America have done? The answer, he decides, is in the French outlook:


[T]hat sort of thing wasn’t likely to happen here in France; here, your chosen career, your métier, was considered your station for life, and you definitely did not give up a well-paying job in Paris to go milk cows in Normandy.

Steinberger blames the French government as much as societal ennui for the culinary crisis. He offers example after example of how politics and excessive regulation are crushing France’s food industry. These examples range from irritating regulatory details, such as a new rule prohibiting wine merchants from displaying “AOC” (premium) wines next to more ordinary vins de pays wines; to onerous laws such as the 19.6% value added tax on restaurant meals; to the biggest political issue of all, the economic legacy of François Mitterand’s socialist policies, which eroded the standard of living for ordinary citizens (left with shorter work weeks and more vacation, but stagnant wages and high inflation) and bled the country of talent as hundreds of thousands of entrepreneurs (including chefs) left for more promising markets.

Steinberger is no libertarian zealot. His political conclusions are based, not on partisan ideology, but on his first-hand observations and discussions with the people trying cook and run culinary businesses in France. It does him credit that he does not shy away from these bigger issues. His clear-eyed approach allows him to provide a comprehensive picture of his subject matter.

Which is not to say that his chosen subject matter is comprehensive. Where the book falls short is in not providing a fuller picture of the current state of French cooking. With the exception of Durand’s cheese making, Steinberger limits his scope to restaurants and, to a lesser extent, wine makers. Discussion of other parts of the French gastronomic scene is missing, such as the state of home cooking in France, the condition of farmers (other than grape growers), and the popularity of food trends like “eating local,” farmers markets, and cooking shows. But this is small criticism, based mostly on wanting more of Steinberger’s keen observation and lively writing.

With luck, and hard work, maybe France can reinvigorate its culinary reputation and Steinberger will write another terrific book about the comeback.

This review was first published in the Internet Review of Books. Reading and reviewing this book allows me poke one paw out of my LibraryThing Early Reviewer doghouse. It also counts as one of the four books I'm reading for the Spice of Life Challenge. And, it is going on my French Connections list.

(If you have a review, please post a link in a comment and I will add it here.)

Posted by Gilion at Rose City Reader at 6:00 AM 15 comments