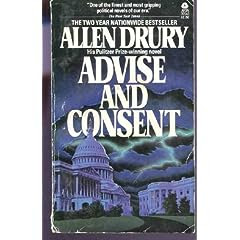 Advise and Consent, Allen Drury’s 1959 Pulitzer winner, thoroughly covers the machinations of the Senate confirmation process as that august body deliberates the nomination of a controversial figure for the post of Secretary of State.

Although long and sometimes exhausting, Drury’s landmark novel is a rewarding book for the patient reader. At over 600 dense pages, this is not a quick read. The first 100 pages seem especially slow as the characters are introduced and the stage set. This behind-the-scenes look at the Senate may have been more interesting before 50 years of televised politics in general and C-SPAN in particular leached any tantalizing mystery out of Senate subcommittee hearings. Once the story builds up steam, however, it powers right along.

The candidate under consideration, peacenik Bob Leffingwell, has his avid supporters, including the somewhat Machiavellian President who nominated him. But he faces stiff opposition from those who think he will be unable to protect America on the brink of a nuclearized Cold War with an increasingly belligerent Soviet Union determined to send men to the moon to claim it as Soviet territory. While the details of the controversy seem anachronistic now, the underlying issue of diplomacy versus military might is as pertinent today as it was 50 years ago.

What is most interesting is that Drury keeps party politics out of it. He does not name either party, and the battle over Leffingwell’s nomination is all within the President’s own liberal party that holds the majority in the Senate. The minority, presumably conservative, party is relegated to the sidelines.

In the end, Leffingwell’s confirmation comes down to character issues as much as his political opinions. The heart of Drury’s story is that, when an unsavory part of Leffingwell’s past arises, instead of having the Senate’s decision turn on the underlying facts, the controversy centers on how Leffingwell and his supporters, including the President, deal with the facts, and what their conduct reveals about their essential worthiness as national leaders. Again, the details of the scandals involved seem quaint now, but the principal debate over what weight to give to politicians’ personal lives still rages.

Stylistically, Drury follows formal conventions, with third-party narration, traditional dialog format, discretion in all things sexual, and one particularly distracting gimmick in that many characters share the same first names. For instance, the nominee and the Senate Majority leader are both names Robert and both go by Bob. Context usually makes clear which one is under discussion, but it seems odd that no one ever mentions that they have the same name. There are also two Hals, two Toms, and two Johns (but no Mikes, Marks, or Daves). Maybe it is more like real life to duplicate names, but some literary customs are there for a reason.

The writing is a little stuffy, but the tone suits the subject matter and helps raise it above a run-of-the-mill political thriller. A sample passage demonstrates Drury’s intricate style as well as his purpose of thoroughly presenting the Congressional system:


The system had its problems, and it wasn’t exactly perfect, and there was at times much to be desired, and yet – on balance, admitting all its bad points and assessing all the good, there was a vigor and a vitality and a strength that nothing, he suspected, could ever quite overcome, however evil and crafty it might be. There was in this system the enormous vitality of free men, running their own government in their own way. If they were weak at times, it was because they had the freedom to be weak; if they were strong, upon occasion, it was because they had the freedom to be strong; if they were indomitable, when the chips were down, it was because freedom made them so.

Although it takes some endurance to get through such a thicket of prose, the effort is worthwhile, which is why Advise and Consent remains the most popular, perceptive study of Congressional American politics on the shelves.

This book was my Pulitzer choice for the Sunshine Smackdown -- Battle of the Prizes Challenge.

If you would like your review listed here, please leave a comment with a link and I will add it.

Posted by Gilion at Rose City Reader at 7:00 AM 2 comments