Review: The Letter from Death 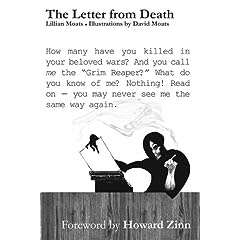 In The Letter from Death, Lillian Moats personifies Death as the author of a letter explaining how a historical misperception of death has created all kinds of problems for mankind. This literary device allows Moats to deliver her secular, pacifist harangue while hiding behind a façade of Art - maybe no one would be interested in listening to Moats's opinions on war and psychology, but they will listen to the Grim Reaper.

Laced with macabre drawings by her son and pages devoted to pithy pull-out quotes, The Letter from Death fills only 128 well-spaced pages. Nonetheless, Moats manages to pack in a lot, presenting the following case:
Wow. Those are some pretty big ideas for a little book. While one might consider tempering criticism with a qualifying, "I'm no theologian, but . . . ", why bother? Moats is no theologian either, and that did not slow her down.

Judging from the hefty bibliography at the back of the book, Moats read a lot in preparation for writing her own book. But conspicuously absent from her list of source material are any holy texts - it seems no Bible, Torah, or Koran informed her decision to reject all religious tradition concerning death and the afterlife. Nor did she read theology, philosophy, political science, or history books. What she read were a lot of sociology and anthropology materials, mostly of the traditionally leftist variety.

It is not just that there are holes in Moats's arguments; there is no argument in her arguments. She just presents these enormous conclusions - in overwrought language - that she admits in her later notes depend on selectivity, sarcasm, "purposeful reductionism," and a "biting tone." It would be one thing if Moats presented a fully developed case; it is another to have conclusions presented as facts from a snarky Death persona claiming to have acquired its wisdom by sucking in the last breath from every dying person throughout time.

For instance, her whole premise is that humans created war out of fear of Hell, but this premise completely ignores the concept of Heaven as a motivating force, or at least a consolation. What about wars fought for the purpose of obtaining divine glory? Whether jihad or crusade, the promise of eternal life, not eternal damnation, can be a powerful motivator. Moats dismisses the idea of a holy afterlife early on, arguing that humans never believed that more that one in 100,000 or maybe one in 15,000 would go to Heaven. That is her only discussion of Heaven until abruptly declaring at the end of the book that it does not exist.

Likewise, to avoid any analysis of how moral and ethical values determine what is "good" or "evil," Moats simply declares that by "good," humans really mean "pure." Under her construct, anything that contaminates a defined set by crossing its boundaries -- whether those boundaries are "tribal, national, [or] personal" -- is defined as evil. Thus, she argues, humans do not really fight for good and against evil, they fight against what is different to them -- if they could just learn to accept differences, there would be no more fighting. She bolsters her argument that there is no qualitative difference between what we call "evil" and what we consider to be "good" with this:


It strikes me as bizarre that you see evidence for the existence of evil only in the behavior of your own kind. You do not call violent weather "evil," though whole cities can be ripped apart by storms. You are more likely to call them "acts of God." You do not label predatory animals "evil," though they may eat alive their screaming prey. Only in deceitful or vicious acts committed by fellow humans do you find confirmation that evil is alive and active in the world.

"Bizarre"? How is the traditional understanding of the nature of evil bizarre? Moats's position -- presented by her Death narrator -- completely begs the question of free will. Acts of God, forces of nature, and animal instinct are not "evil" because they do not turn on the choice of the agent to commit or not commit the act.

These criticisms only scratch the surface of what is wrong with The Letter from Death. According to her publisher, the book is intended to be a "politically charged" polemic on "unnecessary war, injustice and self-destruction," so Moats must anticipate disagreement. But to argue the points she makes is to argue everything -- religion, philosophy, human nature, the causes of war, and the future of the planet. A book that only takes an hour to read does not warrant that level of attention.

Posted by Gilion at Rose City Reader at 8:00 AM 6 comments