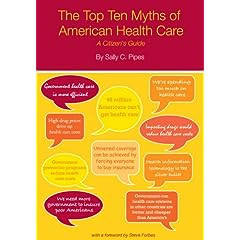 Pipes, a Canadian native, is her most persuasive when she scrutinizes Canada’s and other nationalized medical systems. Relying on her extensive research and personal experience, she spells out why long waits, restricted access to new medications, and doctors on government payrolls are not the solution to America's problems.

In the debate over health care, Pipes has definitely chosen her side, championing free-market reforms such as allowing the interstate purchase of health insurance and revising the tax code to encourage individually-purchased, instead of employer-provided, insurance. But Pipes is no ranting demagogue. Her arguments are concise and supported by solid research as she tries deal rationally with an issue often freighted with emotion.

While aimed at policy-makers, The Top Ten Myths is lively enough for general consumption. Good reading for anyone interesting in going beyond the soundbites and understanding some of the details of health care reform.