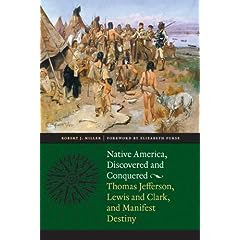 In Native America Discovered and Conquered, law professor Robert J. Miller examines how the international law concept now referred to as the “Doctrine of Discovery” applied to America’s westward expansion. Miller explains how the principles of the doctrine – developed by Spanish and Portuguese explorers in the 1400s and formally adopted in America in the 1823 Supreme Court case of Johnson v. M’Intosh – influenced Thomas Jefferson’s expansionist plans, delineated Lewis and Clark’s duties, and grew into the policy of Manifest Destiny.

This book offers a fresh look at these common chapters in American history by viewing them through the lens of the Doctrine of Discovery, which Miller describes “in a nutshell” as the idea that when a European, Christian nation “discovered” new lands, the European – later American – nation automatically acquired sovereign and property rights in the new land, subject only to the native peoples’ right to occupy and use the land. When the natives stopped using or wanted to sell the land, they had to sell it to the European or American “conquering” nation and to no other.

Miller sticks to his theme well, tying many loose threads of history into his theory. He clearly outlines ten elements of the Doctrine of Discovery: first discovery; actual occupancy; the right of preemption (the exclusive right to buy the land from the natives); Indian title (their right to occupy and use the land); limited tribal sovereign and commercial rights; contiguity; terra nullis; Christianity; civilization; and conquest (virtual, even if not military). He then refers to these elements as he explains that the Doctrine of Discovery was understood in American politics even before the Supreme Court put a name to it in 1823, and that the Doctrine evolved into the popular concept of Manifest Destiny.

The goal of the book is to “shed new light on the conduct of Thomas Jefferson and Lewis and Clark and on many other events in American history and law” in order to “perceive more clearly how tribal governments and individual Indians lost many of their property and human rights, and their sovereign, self-governing powers.” As Miller argues, American Indians lost these rights and powers without their knowledge or consent, by confiscation based only on the “ethnocentric assumption of the ‘superior genius’ of Europeans.” Miller poses this as his “ultimate question”:


[W]hether this relic of colonialism and feudalism, and racial, religious, and cultural domination should be relegated to the dustbin of history. Must Americans and American Indians tolerate the Doctrine of Discovery in our present and our future; is it unchangeable, immutable? Is there anything that can be done to erase a “legal doctrine” that has been enshrined in American culture and law for four hundred years?

In answering his own question, Miller takes the “middle ground” between doing nothing and abolishing the Doctrine altogether and letting the chips fall where they may. His proposal is modest indeed, suggesting only that “Congress could consider after lengthy deliberation and with ample tribal input and direction viable ways to make concrete changes in federal Indian law that could begin to rectify some of the damage Discovery has inflicted on tribal and Indian rights.”

Clearly, what to do with the deeper understanding gained from Miller’s examination of the Doctrine of Discovery is beyond the scope of his book. But the fact that Miller does not solve the problems he describes does not limit the value of this book. Native America Discovered and Conquered provides a necessary foundation for understanding the laws and actions that created the modern legal system controlling American Indians today.


OTHER REVIEWS
If you would like your review of this book or similar books on Indian law listed here, please leave a comment with a link and I will add it.