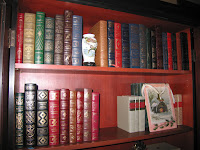 "The most renowned works of literature by history’s greatest authors," according to the Editorial Advisory Board of Easton Press.  It is an interesting mix because it goes back to ancient times, covers the globe, and includes fiction, nonfiction, and poetry.  Easton Press sells the whole set in very fancy covers, but all of these books are available in about a zillion different editions.

Those I have read are in red.  I've read 63 of them, plus bits and pieces of others in high school or college, but I don't count those as finished.  Those currently on my TBR shelf are in blue.

As always, if anyone else is reading the books on this list, please feel free to leave a comment with a link to your progress report and I will add it to this post.

Twenty Thousand Leagues Under The Sea by Jules Verne

The Scarlet Letter by Nathaniel Hawthorne

A Farewell To Arms by Ernest Hemingway

The Red Badge of Courage by Stephen Crane

The Jungle Books by Rudyard Kipling*

The Odyssey by Homer

The Pilgrim's Progress by John Bunyan

Tales From The Arabian Nights by Richard Burton

Oedipus the King by Sophocles

The Hunchback of Notre Dame by Victor Hugo

The Last of the Mohicans by James Fenimore Cooper*

The Sea Wolf by Jack London

The Canterbury Tales by Geoffrey Chaucer

The Portrait of a Lady by Henry James

On the Origin of Species by Charles Darwin

The Legend of Sleepy Hollow and Other Stories by Washington Irving

She Stoops to Conquer by Oliver Goldsmith

Of Mice and Men by John Steinbeck

Pride and Prejudice by Jane Austen

The Brothers Karamazov by Fyodor Dostoevsky

The Iliad by Homer

The Count of Monte Cristo by Alexandre Dumas*

The Three Musketeers by Alexandre Dumas*

Politics and Poetics by Aristotle

The Aeneid by Virgil

The Prince by Niccolo Machiavelli

Romeo and Juliet by William Shakespeare

The Cherry Orchard and The Three Sisters by Anton Chekhov

The Divine Comedy by Dante Alighieri

The Picture of Dorian Gray by Oscar Wilde

The Decameron by Giovanni Boccaccio

The Necklace and Other Tales by Guy de Maupassant

The Time Machine by H.G. Wells

Fathers and Sons by Ivan Turgenev

Heart of Darkness by Joseph Conrad

War and Peace by Leo Tolstoy

Little Women by Louisa May Alcott

The Talisman by Sir Walter Scott

Tess of the D'Urbervilles by Thomas Hardy

The Red and the Black by Stendhal

The Republic by Plato

The Rights of Man by Thomas Paine

Leaves of Grass by Walt Whitman

The Confessions by St. Augustine

Tales of Mystery and Imagination by Edgar Allan Poe

The Way of All Flesh by Samuel Butler*

The Sound and the Fury by William Faulkner (reviewed here)*

Crime and Punishment by Fyodor Dostoevsky


* Marks those that I have in the fancy Easton Press edition, thanks to a lovely Christmas gift from Hubby.

OTHERS READING THESE BOOKS
(If you would like to be listed here, please leave a comment with your links to any progress reports or reviews and I will add them here.)

Posted by Gilion at Rose City Reader at 12:30 PM 10 comments