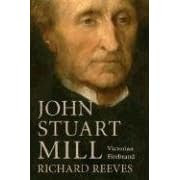 John Stuart Mill was a philosophical piñata. Break open his mind and it would be chock-a-block full, with treats enough for everyone, no matter their political ideology. Of course, it would be impossible to piece it all back together again.

But Richard Reeves’s goal in his new Mill biography is not to make a coherent whole out of Mill’s economic and political philosophy. In John Stuart Mill: Victorian Firebrand, Reeves sets out to make Mill contemporarily relevant to modern political liberals. Reeves acknowledges that bits and pieces—some quite large—do not fit this paradigm, but he does his best to cram as much of Mill as he can into the mold he wants to use.

Born in 1806, Mill turned out to be a child prodigy. His father James home-schooled him relentlessly, so that by the time he was 12 he knew Latin and Greek. He undertook “a complete course in political economy” at 13, and published his first substantive essays when he was 16. At 17, Mill followed his father professionally by joining him at the East India Company, ultimately succeeding his father as Examiner at India House.

Mill also followed his father philosophically, becoming an ardent Utilitarian in his youth, influenced by his father’s friend Jeremy Bentham. Mill went on to tinker with the Utilitarian “greatest happiness principle,” arguing that qualitative differences in forms of happiness need to be considered in analyzing what would produce the greatest happiness for the greatest number of people. Mill argued that intellectual and moral pursuits brought true happiness in a way that entertainment and amusements could not, explaining:

Mill’s own happiness centered on Harriet Taylor, his one true love, possibly his mistress, and ultimately his wife. Harriet influenced Mill’s philosophic development, primarily by fostering his interest in causes near and dear to her, such as women’s rights. She helped him with his work, and her influence can be seen in many of his best-known books, including Principles of Political Economy, On Liberty, and The Subjection of Women. The latter, published after Harriet’s death, earned Mill the title of the Father of British Feminism.

There was a lot going on in Mill’s mind and career. After leaving India House, he focused on his writing. Later, he served a term in Parliament. He was an avid traveler, hiker, and botanist, dividing his time between England and his adopted France, where he had a house in Avignon.

Reeves’s efforts at corralling this massive amount of information about Mill raises a minor, but nagging, problem with the book—the lack of visual breaks in the text. Reeves uses no page breaks, subheadings, or any other indication of a change of subject. In chapters fifty or sixty pages long, covering multiple subjects, it is daunting to face nothing but dense text. For example, in the 58-page chapter titled “A Short, Bad Parliament (1865-8),” Reeves covers Mill’s involvement in causes as diverse as Irish land reform, the secret ballot, cooperative ownership of business, Jamaican governance, and women’s suffrage, without any visual transition. There is no hint of where to take a break. At 487 pages, the book is long, but not so long that a few double spaces between topics would not be welcomed.

A twenty-first century examination of Mill’s writing and actions is a worthwhile, if daunting, undertaking. There is no question but that evaluating Mill’s wide-ranging, nuanced, often anachronistic, and sometimes contradictory thinking makes for heavy sledding. But not content to simply examine Mill’s work, Reeves goes one step further, perhaps one step too far, to try to find a hook that will make Mill appealing to a modern audience. There is enough in Mill’s thinking to catch the attention of political animals of every stripe, from free traders to die-hard Marxists. As Reeves explains:

Politically, Mill has been claimed, and continues to be claimed, by pretty much everyone, from the ethical socialist left to the lasses faire, libertarian right—and at various points by every major political party.

Faced with this hodgepodge of thinking impossible to fit into a modern-day political cubbyhole, Reeves engages in a little semantic sleight of hand to make his point. He uses political labels such as “conservative,” “liberal,” “radical,” and “progressive” as if they have always had the same meaning from Mill’s day to ours. By consistently labeling Mill as a liberal, with progressive ideas, sometimes undertaking radical causes, Reeves positions Mill as a hero of the modern left.

But Mill’s liberal ideology was often closer to the “classic liberalism” of Milton Friedman and others of a libertarian bent. The progressive causes Mill pursued were often the opposite of what today’s progressives would support, whereas conservative notions of Mill’s time would be championed by today’s liberals. For example, Mill’s liberal agenda stressed greater freedom for companies to industrialize, while the conservatives in opposition “railed against the rise of cities [and] industry” and called for “worship of nature and proper acknowledgement of the value of the human spirit.”

For readers new to Mill—and there are many—a straightforward analysis of how the various aspects of Mill’s philosophy square with contemporary political and economic thought would be valuable. However, because in the century or more following Mill’s death in 1873, “Mill’s intellectual stock fell, and his radicalism was covered over with dust,” Reeves needed an angle to try to renew interest in Mill’s life and works. By trying to make Mill a standard bearer for modern liberalism, Reeves may indeed appeal to a broader audience, but he contributes less to solid scholarship.

Nonetheless, Victorian Firebrand adds much to an overall analysis of Mill’s philosophy and is as good a starting point as any for a contemporary study of this prolific writer and controversial thinker.


NOTE
First published in the October 2008 issue of the Internet Review of Books.

OTHER REVIEWS (Please leave a comment with a link if you would like your review posted here.)

Posted by Gilion at Rose City Reader at 10:20 AM 0 comments