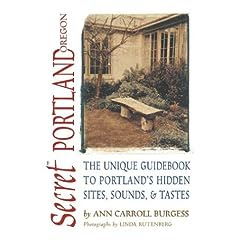 Having greatly enjoyed Secret New York and Secret San Francisco from the same series, I was looking forward to reading Secret Portland by Ann Carroll Burgess. The New York book has successfully guided me to several hidden treasures. When I lived in San Francisco, that book was my invaluable guide to deep exploration of my adopted city.  But the Portland edition doesn't stack up to the other two.

As a Portlander, I am more picky than a visitor reading the book. Still, it just does not have the same insider flair that the New York and San Francisco books have. The other two were written by people who live in the cities they wrote about. It is obvious that this author does not live in Portland and has not spent much time here. The information is standard for any guidebook of the city. Chuck Palahniuk's Fugitives & Refugees is a much better, although seamier, resource for finding the quirky side of the Rose City.

In addition to only covering the "sites, sounds, & tastes" that you can find in any hotel room visitors' guide, Secret Portland is full of several small, but irritating, errors. For example, while the book includes a truly secret Portland gem, Martinotti's Italian cafe and deli, it misspelled the name as Marinotti's. Even more confusingly, several listings misidentify the neighborhood. For example, the book identifies many downtown locations in southwest Portland as being in the "Buckman" neighborhood -- a neighborhood across the river in southEAST Portland. The nail in the coffin was the author's tip on how to pronounce the name of Portland's river, the Willamette: "Want to sound like a local? Make sure to pronounce it "will-uh-met," with the accent on the "uh." Wrong-o! As any Portlander will tell you, "It's will-A-mitt, damn it!"

Posted by Gilion at Rose City Reader at 2:13 PM 1 comments