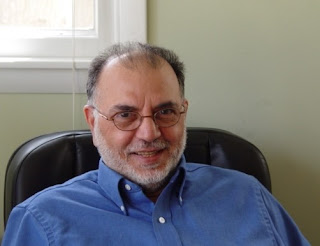 Mohammad Yadegari immigrated to the United States for college and graduate school where he met and married his wife Pricilla. He wrote his new memoir, Always an Immigrant, in the form of personal stories and anecdotes about growing up in the Middle East in the the 1940 to early 1960s and then moving to America. He's a good storyteller and the book is full of humor and real life wisdom. 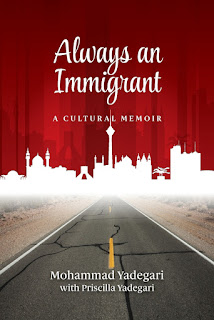 Mohammad talked with Rose City Reader about cultural observations, his Always and Immigrant memoir, and his availability for book clubs:
Please tell us a little of your background and how you came to write Always an Immigrant.

I was born in 1941 in the holy city of Karbala in Iraq in an Iranian family, lived until the age of 18 in that country, then traveled to Iran and lived four years there, and came to the United States to study in 1964. I received my BS and MS from State University of New York at Albany in Mathematics and my PhD from New York University in Middle East Studies.

As a professor of cultural history of the Middle East at Union College and The University at Albany, I was surprised at how little American students knew about the complexity of life outside the United States and how little they knew about past generations in America itself. For example, while women students made fun of modest Middle Eastern attire, they did not realize that similar modesty existed in the kind of clothing their own mothers and grandmothers used to wear. I was puzzled that almost all of my students were unaware that fitness centers were a fairly recent innovation in the U.S. Much has changed during the last half century of my stay in this country and many of my students did not realize the effects of those changes on society. Most such changes are learned through oral tradition which is dying steadily nowadays.

In my classes I drew parallels between the customs and traditions in the Middle East and those of the United States. My students were fascinated and it was they who urged me to write my stories.

The story of how you met and fell in love with your wife Priscilla is very sweet. What was her role as co-author of your book?

I love to talk and recount events of my life. When I started writing my memoir, I wrote individual vignettes about specific occurrences. Having heard most of those stories, Priscilla was in a position not only to edit my writing but to rearrange it to convey the meaning I had intended. When we had collected about thirty vignettes, it was Priscilla who arranged them in somewhat chronological order. She also suggested topics to fill in the gaps and make the material flow more smoothly. Her contribution was tremendous.

What do you want readers to take away from your book?

To understand that people of different cultures, all over the world, have similar kinds of hopes, aspirations, dreams, and even superstitions.

What do you think people can learn from immigrant stories in general?

Immigrants face special challenges when trying to acculturate to a different society. Their first and perpetual struggle is in language. In addition, they are constantly faced with prejudice related to race, color, cultural differences, and customs. What they are looking for but seldom achieve is what every human being seeks: respect.

Did you learn something about yourself from writing Always an Immigrant that you didn’t know before?

Before coming to America, I had an idealistic view of Americans and American life. Because of that, I did not realize how difficult it would be for me to be successful in the U.S. When I wrote the chapter, “Teaching at RCS,” I began to recognize how easily I had fallen victim to the racist tendencies of a group of adults who assumed they were better than me. It was then that I realized how naïve I had been.

“Riveting and compelling,” the first words from the editor of The Altamont Enterprise were much appreciated.

My style may have been influenced by Steinbeck.

I like to read books on human relations and social interaction. I recently read Isabel Wilkirson’s books The Warmth of Other Suns and Caste. I am presently reading Maya Angelou’s The Heart of a Woman.

Do you have any virtual events coming up to promote Always an Immigrant?

I have promoted my book by podcast and speaking to book clubs. If anyone reading this interview has a book club and is interested in suggesting my book to your group, I can be reached at Myadegar@mac.com and I can join your group via Zoom or speaker phone for a more in-depth conversation.

I am in the process of reading and editing the translation of Always an Immigrant in Persian to be published by Jarf Publication in Tehran, Iran.

THANK YOU, MOHAMMAD!
ALWAYS AN IMMIGRANT IS AVAILABLE ONLINE.