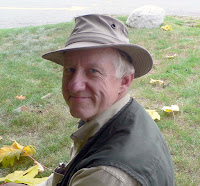 Kem Luther is a naturalist, writer, and former professor who grew up in the Nebraska Sandhills and now lives on Vancouver Island. He is the author of Cottonwood Roots and The Next Generation Gap.

His new book, Boundary Layer: Exploring the Genius Between Worlds (OSU Press), is a highly readable collection of essays about the what grows close to the ground -- lichens, mosses, ferns, fungi, and other diminutive plant life -- and the scientists who study this boundary layer.

How did you come to write Boundary Layer?

“How long did it take you to write this book?” is a question often put to writers. “All my life” is the clever retort. In this case, though, the boilerplate answer has a ring of truth. I’ve been drawn to natural settings since I was a boy. Boundary Layer is my just latest attempt to put on paper some of the stories from a lifelong engagement with the natural world.

West Coast ecosystems were a blank spot on my natural history map. When my wife and I moved to British Columbia twelve years ago, I liked what I saw and I soon entangled myself with several of the natural history groups on southern Vancouver Island. Boundary Layer emerged from this entanglement. The book looks at some components of the Pacific Northwest ecosystems— mosses, fungi, lichens—and the fascinating characters who have spent their lives studying these often overlooked subsystems.

I spent my professional career in colleges and universities, both in the U.S. and Canada. I taught philosophy at first, later computer science. Toward the end of my career, I moved into educational administration in order to launch a cross-disciplinary program at the University of Toronto, a program that now enrolls about a thousand students. About ten years before I retired, I started writing trade books, books directed at wide audiences. Keeping up both a writing career and a full time job were too much, so I took an early retirement from teaching and administration in order to concentrate on my writing.

In the last chapters of Boundary Layer, I delve into material that was close to my heart when I was a student and teacher of philosophy. The narrative of the book is stitched together with what physicists and biologists have discovered about boundary layers, the narrow regions that lie between large, stable systems. In the first part of the book, I deal with several of the more tangible boundary layers, the ones that are found on seashores and forest floors in the Pacific Northwest. As the story progresses, the metaphor of a boundary layer become a way to talk about our wider human posture toward natural systems. Certain crucial issues in biology—the tension between species concepts and ecosystem thinking, the debate about what is wilderness what is artificial—can be approached as conflicts that generate conceptual boundary layers. These more abstract boundary layers, I find, resolve some of the differences between the bounding systems. At the end of the book, I take up (briefly) the largest conceptual boundary layer in Western society, the struggle between a cultural understanding based on humanities and one based on science.

You write about the stegnon, the layer closest to the ground, where things like lichen, moss, and fungi grow. How did you become interested in this layer between earth and air and the diminutive life forms that live there?

There’s a wonderful line in the 1939 film adaptation of Frank Baum’s The Wizard of Oz. When Dorothy and her crew finally get to meet the wizard, they are confronted with a fearsome image with a thunderous voice. Dorothy’s dog, Toto, runs over to the side of the interview hall and pulls back a curtain, exposing a normal, all-too-human person engineering the wizard’s image. Seeing himself exposed, the wizard makes the image say “Pay no attention to that man behind the curtain.” I think that I became interested in the nondescript stuff along the forest floor because I was getting a subtle message from some biologists and naturalists that the denizens of the bottom storey of West Coast forests were not as important as the trees and shrubs and mammals. The more I looked into the life cycles of the neglected mosses and lichens and mushrooms, the more it became clear to me that they were the ones who were really calling the shots. That made me want to pay attention to what was behind the curtain, to retell the story of these ecosystems in a way that included these smaller life forms.

Your book is an enlivening mix of botany, natural history, philosophy, and biographical sketches of the scientists who study the stegnon. Who is your intended audience?

I tried to write Boundary Layer so that a person with a high school background in biology could follow the stories in it. I didn’t always succeed. As I edited the book in the months before handing it over to Oregon State University Press to publish, for example, I removed a least two dozen technical terms from the text. I find it distressing how quickly I can drop into the jargon of the professionals who study what I am writing about, often without even realizing that I’m doing it.

What did you learn from writing Boundary Layer – either about the subject of the book or the writing process – that most surprised you?

My encounter with the composite nature of lichens helped me rethink the integrity of biological species. I began to investigate more closely the way that almost all organisms are composite entities. Some of this investigation ended up in the text of Boundary Layer, but not all of it. I have since developed a slide talk that carries my thoughts on this topic a bit further (“Lichens, Chimeras, and Superorganisms: Life On the Borderlands between Species and Ecosystems.” You can view a web list the book-based talks I’ll be doing over the next few months under the Events tab on the book’s web site,)

What writers inspire your own work and why?

Some of our best nature interpreters were also great writers. I’ve been influenced by the superb styles of Aldo Leopold, Annie Dillard, Loren Eiseley, Henry David Thoreau, and John McPhee, among others. But I don’t just read books on natural history. I’m attracted to magnificent prose on any subject, whether nonfiction (George Orwell) or fiction (Anne Tyler). When I find a great writer, I tend to binge read everything the person has written.

Do you have any favorite books of nature writing you would recommend to readers new to the genre?

Those who are interested in what I wrote in Boundary Layer about the concept of nature will find sympathetic treatments of the subject in two recent books, Emma Marris’s Rambunctious Garden and J.B. MacKinnon’s Once and Future World. These books came out after I wrote the section in Boundary Layer on the concept of nature, but before my book was published. When I read these books, I was surprised to see how our thoughts had been moving along similar grooves at the same time.

I’ve always had a fascination with language and words. Just last week I completed the first draft of a book on eggcorns, language slips that involve both sound and sense.

BOUNDARY LAYER IS AVAILABLE FROM OSU PRESS, OTHER ON-LINE SELLERS, OR ASK YOUR LOCAL BOOKSTORE TO ORDER IT!