It has long been a book-loving dream of mine to visit the famous Bibliothek at the Benedictine Abbey in Metten, Germany.

I first saw the library featured in a coffee table book called The Most Beautiful Libraries in the World.  Not only was there a chapter on the Metten library, but it was beautiful enough to warrant the picture on the back cover.

But what really captured my fancy was that the Metten library is part of the same "Kloster" that houses the school several of my cousins attended.  My paternal grandfather grew up in Bavaria, in a tiny village near the little village of Metten, both outside the small city of Deggendorf.  That corner of Bavaria is thick with cousins of varying degree.

When I went to one cousin's graduation in 2002, I was disappointed that the Bibliothek was not open for some reason.  I was determined to see it when I was in Bavaria last week.  It took a couple of tries, due to my inadequate German and the Kloster's inadequate signage, but Hubby and I made it to the tour Saturday morning.

Don't turn me in to the elderly woman who lead our tour, but I surreptitiously took some forbidden photos.  No flash -- I'm not a total scofflaw.  But I was not going to pass up this once-in-a-lifetime opportunity. 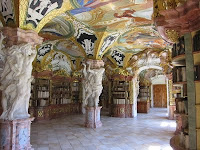 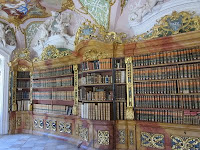 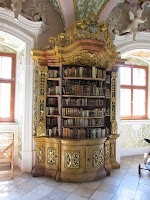 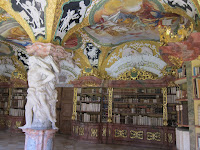