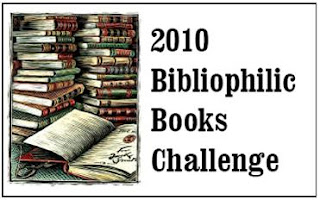 This is my organizational post for the Bibliophilic Books Challenge.

I am excited about this one, because I thought I had imagined it, but it turns out it really exists. The point is to read books about books. They can be fiction or non-fiction, so there are plenty to chose from. There are many qualifying books on my TBR shelves right now, and I have really been in the mood for them.

I signed up for the "Bibliomaniac" level, which means I have 12 to read by the end of the year. I do not have a final list yet, but I have several in mind.  There are enough choices on my TBR shelf that I chose all 12 from what I have now.

There are a lot of author biographies on my list. I think they fall within the guidelines for the challenge, because they discuss the authors' books. But if they do not count, there are plenty of other choices on my list.

The Flaneur: A Stroll Through the Paradoxes of Paris by Edmund White (reviewed here)

A Year in the World by Frances Mayes (reviewed here)

Housekeeping vs. the Dirt by Nick Hornby (not reviewed yet).


GRABBING MY ATTENTION
Shakespeare Wrote for Money by Nick Hornby

How to Read and Why by Harold Bloom

The Bookshop by Penelope Fitzgerald

The Club Dumas by Arturo Perez-Reverte

At Home with Books: How Booklovers Live with and Care for Their Libraries by Estelle Ellis

The Most Beautiful Libraries in the World by Guillaume de Laubier

Saul Bellow: A Biography of the Imagination by Ruth Miller

Greene on Capri: A Memoir by Shirley Hazzard

Walks in Hemingway's Paris: A Guide To Paris For The Literary Traveler by Noel Fitch