Opening Sentence of the Day: After Dinner Speaking 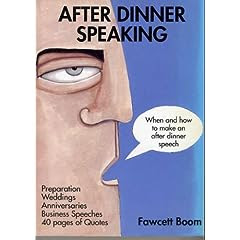 "Some of the sweetest sounds that a speaker can hear are the surprised ripple of laughter from the audience, the murmurs of approval at praise well deserved, and the firm hand of applause at the end of a speech, a sound of clapping that goes beyond the polite." -- After Dinner Speaking by Fawcett Boom This little book was published in 1991. I think I picked it up some time in the 1990s, when I was putting in my time with various Bar organizations and had to do my share of speaker introductions and opening remarks. Too bad I never read the book back then. I usually ended up winging it and my attempts at public speaking were always too glib, too rushed, and generally botched. Never too late to learn, though, so I am finally going to read this book. For one thing, that will get it off my nightstand where it has lived for the last 15 years.

Posted by Gilion at Rose City Reader at 9:54 AM 2 comments