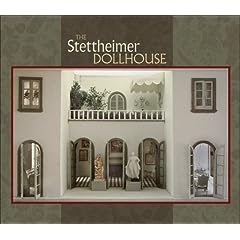 The Stettheimer Dollhouse is a little gem, appropriate enough for a book about miniature art.  The dollhouse itself – designed by, built for, and painstakingly decorated by Carrie Stettheimer from 1916 to 1935 – is itself a work of art.  It is also, to its lasting fame, filled with actual paintings and sculptures created for Stettheimer by some of the leading artists of her day.

The dollhouse is in the permanent collection of the Museum of the City of New York.  The book is a small catalog of the dollhouse exhibit, filled mostly with pictures, with written descriptions of each room of the dollhouse.  There is also a preface by the museum curator, a brief history of the dollhouse by Sheila Clark, and a reprint of the original remarks written by Stettheimer’s sister Ettie when she donated the dollhouse to the museum after Carrie’s death.

What the book was not intended to provide but noticeably lacks is an in-depth biography of Stettheimer.  She and two sisters never married, the three living with their mother in Europe and New York.  Florine was an artist who only came to modest fame after her death.  Her enchanting portrait of Carrie is reproduced in the book and a black and white miniature version hangs framed in the dollhouse dining room.  Ettie was an author.  Unfortunately for her own creative endeavors, the role of house manager and hostess fell to Carrie, who devoted her energies to running the house for the four women and hosting “one of the most notable literary and artistic salons of early twentieth-century New York society."  Carrie's dollhouse was her only artistic outlet.  These sketchy details create a melancholy picture.

Hopefully someone will pick up where this book leaves off and write a definitive biography of the Stettheimer sisters. In the meantime, The Stettheimer Dollhouse is a charming introduction to this distinctive family.

Ready When You Are, C.B.
Kittling: Books