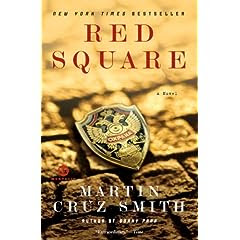 Red Square is the third book in Martin Cruz Smith’s Arkady Renko series, following Renko’s introduction in Gorky Park and Siberian exile in Polar Star.  In Red Square, Renko is back in Moscow, reinstated as an investigator with the militia. His efforts to discover the killer of a black market financier lead him to the world of high-stakes art smuggling, the Munich studios of Radio Liberty, and the arms of his lost love Irina.

Set at the brink of the 1991 “August Coup” that precipitated the final breakup of the Soviet Union, Red Square is as moody and grim as all the Renko novels. Mafioso capitalists – still more robber than baron – vie for control of the fledgling new economy while people stand in line for beets and Party apparatchiks cling to the shreds of power. Smith captures the inherent dichotomies with snapshots such as this scene at the end of Renko’s interview of a suspect at the man’s Western-style sports bar:


Borya . . . dropped his voice. . . . “[D]o you think I’d endanger all this, everything I’ve achieved, to take some sort of primitive revenge? That’s the old mentality. We have to catch up with the rest of the world or we’re going to be left behind. We’ll all be in empty buildings and starving to death. We have to change. Do you have a card?” he asked suddenly.

“We collect business cards and have a drawing once a month for a bottle of Chivas Regal.” Borya controlled a smile, barely.

It is detailed touches like this – as well as emotionally evocative lines such as “despair saturated the air” and “the threadbare overcoats of Soviet crime” – that create the authentic atmosphere in Smith’s novels and raise them above the typical thriller.


OTHER REVIEWS
If you would like your review of this or any other Martin Cruz Smith book listed here, please leave a comment with a link and I will add it.

Posted by Gilion at Rose City Reader at 8:00 AM 5 comments