Review of the Day: A Grave Talent 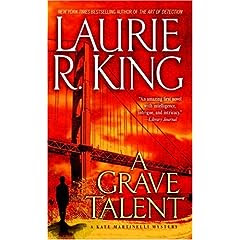 Laurie King's mystery, A Grave Talent, was King's debut novel and the first in her San Francisco-based series featuring police detective Kate Martinelli. The book does not have the most intricate plot, but the characters make it worth reading.

Vaun Adams is a reclusive artist living in a neo-hippy community (not quite a commune) in the coastal mountains near San Jose. Because of her past troubles, she is the first suspect when three little girls are found murdered in the isolated community. Martinelli and her curmudgeony partner, Al Hawkins, dig into Vaun's past and learn they may have the story turned around.

Like many "first in a series" novels, several characters are introduced with enough detail to make them interesting, but not filled out enough to make them really compelling. For instance, we learn a lot about Martinelli's personal history and private life, but we don't see her demonstrate any of the talent and intelligence that, supposedly, has made her a rising star in the San Francisco Police Department. She spends most of her time driving her partner or babysitting Vaun Adams.

In Hawkins, on the other hand, we learn very little of his past or his personal life, but we see layers to his personality as he acts as a skilled interrogator, a compulsive workaholic, something of a ladies’ man, and both a boss and friend to Martinelli. Hopefully, the characters develop further in the later novels.

King is a prolific author, best known now for her second series, the Mary Russell series of historical mysteries featuring the very young apprentice of a very old Sherlock Holmes. Her stand alone novels, such as Folly and A Darker Place, are strong, non-formulaic suspense stories starring independent and iconoclastic, if flawed, women protagonists. King offers plenty of good reading.

Posted by Gilion at Rose City Reader at 6:01 PM 0 comments