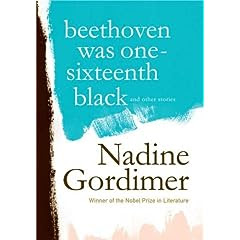 Beethoven Was One-Sixteenth Black, a collection of short stories by South African Nobel Prize winner Nadine Gordimer, has its hits and misses. The misses include a story about a tapeworm from the tapeworm’s perspective; a reminiscence of a cockroach trapped in a typewriter that doesn’t rise above casual anecdote; and the self-indulgent “Dreaming of the Dead” in which Gordimer recounts a dream of having dinner with Susan Sontag and two other deceased friends.

The hits more than make up for weaknesses in the collection. Gordimer’s elegant writing raises ordinary events above the tawdry and mundane, pulling out bigger ideas and themes, including the theme of personal identity in a changing world. In the title story, for instance, the protagonist goes on a half-hearted search for black relatives possibly descended from his white, diamond-prospecting great-grandfather. Gordimer subtly makes it clear that his search is driven by more than genealogical curiosity as he searches for a family that would unify his prior anti-apartheid political efforts and his personal history.

Likewise, in “A Beneficiary,” a young woman faced with the early death of her actress mother struggles to determine which is her real identity – daughter of the famous actor who sired her, or the loving businessman who raised her knowing she was the product of his wife’s brief, illicit affair.

Gordimer is at her best writing about marriage and its challenges. Adultery and sexual history are common elements. In “Alternative Endings,” for example, Gordimer examines adulterous affairs in three stories, using a different one of the five senses as the focus of each. Unfortunately, while one of the three involves hearing and another scent, it is entirely unclear which sense was featured in the third. More confusing, especially since this trilogy ends the book, is why Gordimer didn’t write five stories so as to feature each of the five senses.

Overall, this is a worthwhile collection of stories and a good introduction to Gordimer’s sophisticated writing.

(Please leave a comment with a link to your review and I will add it here.) .