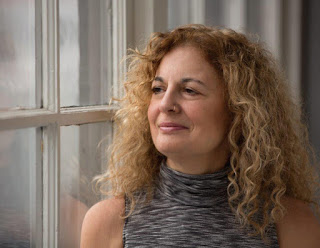 Wendy Gordon's debut novel, Wrong Highway, gives fresh energy to the story of a frazzled suburban mom trying to meet her family obligations and what happens when she takes that first wrong turn.

Wrong Highway comes out this week. Wendy Gordon will launch the book at Powell's Books in Portland on June 15, 2016 at 7:30. She is also having a reading and book signing at Book Revue in Huntington, Long Island on June 21 at 7:00.

The eighties fascinate me. While most decades bleed into one another (the “sixties” for instance, really refer to the late sixties and early seventies) the eighties began and ended right on schedule. Eighties culture was distinctive—brash, artificial, over the top, hopeful in its own energetic way—yet carrying within it the seeds of its own destruction.

Many of Wrong Highway’s themes are timeless, but I do not think that particular story could take place today. Too many things have changed, many of which were barely imagined thirty years ago—cell phones, the internet, social media. I think it is harder to keep secrets now.

I always had the ending image in my mind—baby Sophia overwhelmed and exhilarated by the abundance of “doggies”, and Erica following her. The rest came to me during the writing process.
I am a fan of ambiguous endings. Life is way too complex, mysterious and open ended. Good deeds aren’t always rewarded and bad deeds aren’t always punished. And what constitutes good or bad may be a debatable question.

That in order to write a riveting story I could hold nothing back. My characters needed to take big risks, and in the process forced me to become ever more soul-baring in my writing. I felt like the story was always out there, and if I stripped away enough defenses, I could find it.

I have two degrees in clinical nutrition and write restaurant reviews, recipes, and articles on health and nutrition, as well as human interest feature articles. My other “day job” is that of a mother and homemaker. My youngest (of four) is now sixteen, but I help care for my four preschool granddaughters so young children are still a big part of my life.

While I enjoy writing nonfiction, I find it limiting. I’ve always been an observer and a storyteller, without a super literal take on reality. I’ve written fiction since I was a little kid but did not have the confidence to call myself a “writer.” Gradually the compulsion to put down my stories on paper became too strong too ignore.

Oh, yes. My father was a professor and my mother a librarian. Books spilled over every surface of our house. I taught myself to read when I was three.

My father adored bookstores and every time he visited Portland he announced he was “going to make a visit to Mr. P” (Powell's). I wish he was alive today to hear me do a reading there.

As a teenager I was a big fan of Hermann Hesse. I’ve re-read several of his novels recently, together with my teenage son and they are just as visionary forty years later.

Generally I like books that are accessible and page turning while still probing deeply into people, relationships and society. I like books that shake me out of my comfort zone, keep me awake at night, and leave me a little different than I was before I read them. A few favorite authors; Donna Tartt, Margaret Atwood, Andre Dubus (both father and son), Janet Fitch, Deborah Eisenberg.

I just finished the The Girls, by Emma Cline, which was fantastic. I am currently reading The Reasons I Won’t be Coming, by Elliot Perlman.

You have a terrific website and are also on facebook and twitter. From an author's perspective, how important are social networking sites and other internet resources to promote your book?

Internet sources are one of the best things going for book promotion. They are the best way to reach your wider circle of friends and acquaintances as well as the general public. I have been surprised and pleased at the response I’ve gotten so far.

Write every day. Hold nothing back.

What is a typical writing day like for you?

I try and write for a couple hours every day, whenever those open hours arise.

Creating characters in my head and bringing them to life on paper. My character Erica says that “childbirth is the best rush ever.” I agree, but writing fiction comes close.

I have two projects going. One is turning a screenplay I wrote in 1999 into a novel. The other is a novel entitled It’s Always 9:11 because whenever I look at the clock, that’s the time it seems to be.

WRONG HIGHWAY IS AVAILABLE ON JUNE 10 ON-LINE OR ASK YOUR LOCAL BOOKSTORE TO ORDER IT.